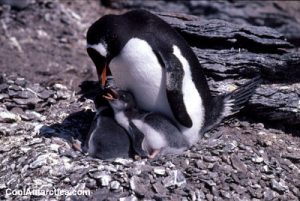 Poor little penguin off to fish

In the big sea with whales and squid

To birds and seals and great big fish

This little penguin is a tasty dish.

Sea-ice advances and retreats every year in Antarctica, the coldest region on earth. Antarctica is situated at the South Pole, where it is surrounded with islands and seas, and covered with a thick sheet of ice. The sheet of ice grows around the edges of the continent at the end of its Antarctic summers as the sea begins to freeze. And nearing the end of winter the ice sheets dotted with little black and white penguins, begins to melt, and crack, and it breaks up into many glittering blue and white chunks of ice which float away upon the Antarctic sea.

There are six different genera (groups) of penguins. Gentoo, adelie, and chinstraps are known as pygoscelids (“Brush-tailed”) because they have long sturdy feathered tails that stick out like brushes behind them.

Brush-tailed penguins are easy to identify, the chinstraps have thin black straps beneath their chins, adelies have feathered beaks and white rings encircling their eyes, and gentoos have a flash of white feathers which extend from the top of one eye over the head to the top of the other eye.

The penguins have a loud and unmusical speech, which, within their colonies during courtship, sounds like a loud continuing roar.

Gentoo penguins live on the continent of Antarctica and on its surrounding islands.

Nesting.
Gentoo penguins come to land to breed and moult. Waddling over ice and snow and rocks, on well worn penguin tracks, the gentoos climb to their exposed nesting areas, near the water’s edge, and to ridges of rock that tower above the sea.

Thousands of gentoo penguins who sometimes share their rookeries with chinstraps and adelies build bowl shaped nests of rocks about three and a half feet apart. Both the male and the female build the nest by gathering and or, stealing rocks. The nest is bowl shaped to accomodate the penguins round belly and to prevent the eggs from rolling away. The female lays two eggs over a period of days, and having not eaten for about a week, leaves the male to incubate the eggs as she goes off to sea to feed. Gentoos go to the sea daily to feed, and return to their nests at night. Both the male and the female gentoos share the responsibility of incubating the eggs, while other gentoo penguins wander around looking for, and stealing, some of their rocks. Gentoo penguins pick up small rocks in their bills and carry them one by one to their nests. The building up of the rocks protects the penguins and their chicks, from drifting snow, falling rain, and melting ice.

Chicks.
Newborn chicks covered with downy-gray feathers hatch out of gentoo eggs about 35 days after they were laid. Both the male and the female share the tasks of feeding and protecting the chicks, and keeping them warm and dry. Large brown sea gulls called skua birds eat penguin eggs and chicks.

Returning to the nest.
Emerging from the sea, full of food for their chicks, climbing gentoo penguins, waddle over snow, stained pink from microscopic algae, and they stop and rest, as they walk on their three toes (tiptoe) and hop, from rock to rock to reach penguin trails that lead up to their rocky nests. And raising their bills to the sky they trumpet and make braying sounds as they call to their waiting mates and chicks, and many hungry little chicks run to greet the parent, and the adult turns and waddles away with all the hungry chicks running after it, but the gentoo will only feed its own chicks, and since they recognize its voice they do not stop chasing the parent until they are fed their food.

Diet.
Flying through the water, propelling themselves through the sea with their flippers, and steering with their feathered tails and webbed feet at speeds of 27 miles per hour (45 kilometers per hour) gentoo penguins porpoise in and out of the water to breathe, and with retinas that are extremely sensitive to the underwater colors of violet, blue and green, they dive to depths of more than 490 feet (150 meters) to hunt, and feed upon fish, squid, and miniature pink shellfish called, krill.

Krill is a major source of food in the oceans of Antarctica. Penguins, seals, and whales, eat krill.

Camouflage.
The black and white coat of a penguin helps to camouflage (hide) it in the sea. From beneath, the white coat blends in with the shining surface of the sea and the sky, which helps it to hide from its prey, fish and krill, while from above, the penguins black feathered back blends in with the darkness of the deep, helping to hide it from predators like leopard seals who catch and eat gentoos as they swim in the sea.

Keeping Cool.
Penguins have a layer of fat (blubber) beneath their skins which helps to keep them warm, and every square inch of a penguins body is covered with 70 feathers, thats 455 feathers per square centimeter. The feathers trap a layer of air near the penguins skin which helps to keep them warm. Hot penguins cool down when they emerge from the freezing seas by ruffling their feathers to replace warm air with cool air, and by extending their flippers which causes heat from their bodies to be released from the undersides of their flippers into the cool, and chilly air. Heat is also released from the penguins thick skinned pink, feet.

Oily Feathers.
Penguins preen their overlapping feathers, and they waterproof them with oil from a gland at the base of their brush-tails. Using their bills and the claws of their feet the penguins spread the waterproofing oil over the feathers.

Creches.
Gentoo chicks gather together in creches where they are protected from skua birds who prey on solitary chicks.

Moulting.
Nearing the end of the breeding season, gentoo penguins stand around fasting and resting for about three weeks until their old and tattered falling coats, are replaced by new and smooth shining feathers.

Adult Feathers.
When gentoo chicks have grown their adult waterproof feathers they go into the sea and swim, but until they learn to hunt for their own krill and fish, they return to their parents for food.