Any errors within any of my “Bible Studies” are “Definitely Not“ intentional.

The Earth is whirling in the presence of the sun as travelling in a loop it orbits the Sun.

52 This man went unto Pilate, and begged the body of Yehôshûa‛ Yehôshûa‛.

53 And he took it down, and wrapped it in linen, and laid it in a sepulchre that was hewn in stone, wherein never man before was laid.

54 And that day was the preparation, and the sabbath drew on.

55 And the women also, which came with him from Galilee, followed after, and beheld the sepulchre, and how his body was laid. Luke 23:52-55

Joseph of Arimathaea obviously, with the help of (someone!) Nicodemus (?), lifted the cross out of the ground, and after removing the dead body of the Messiah from the cross, may have then, violently (destroyed) demolished it!

39 And there came also Nicodemus, which at the first came to Yehôshûa‛ Yehôshûa‛ by night, and brought a [G3395 to mix, mingle, compound, mixture.] mixture of [G4666 Perfumed (ointment) oil.] myrrh and [G250 aloe gum] aloes, about an hundred pound weight.

41Now in the place where he was [G4717 σταυρόω stauroō stow-ro’-o From G4716; to impale on the cross; figuratively to extinguish (subdue) passion or selfishness: – (to) crucify. G4716 σταυρός stauros stow-ros’ From the base of G2476; stake or post (as set upright), (specifically) a pole or cross (as an instrument of capital punishment); Abstractly exposure to death, self denial; implying the atonement of The Messiah: – cross.] crucified there was a garden; and in the garden a new [G3419 μνημεῖον mnēmeion mnay-mi’-on From G3420; a remembrance, i.e. cenotaph (place of interment): – memorial, grave, sepulchre, tomb.] sepulchre, wherein was never man yet laid. [Near (G2768 Calvary, G1115 The place of the skull) Golgotha there was a Garden, and The Messiah’s sepulchre was in that garden. Matthew 27:33 G1115 Golgotha. Matthew 27:33 Skull G2768]

42 There laid they Yehôshûa‛ Yehôshûa‛ therefore because of the Jews’ preparation day; for the [G3419 μνημεῖον mnēmeion mnay-mi’-on From G3420; a remembrance, i.e. cenotaph (place of interment): – memorial, grave, sepulchre, tomb. G3420 μνήμη mnēmē mnay’-may From G3403; memory: – remembrance, memory. G3403 μιμνήσκω mimnēskō mim-nace’-ko A lengthened form of G3415 (from which, tenses are borrowed); to remind, i.e. (middle voice) to recall to mind: – be mindful (of), (to) remember.] sepulchre was nigh at hand. John 19:38-42

44 And Pilate [G2296 θαυμάζω θαῦμα thauma thou’-mah Apparently from a form of G2300; wonder (correctly concrete; but implying abstract): – admiration. G2300 θεάομαι theaomai ὀπτάνομαι, ὄπτομαι optanomai optomai op-tan’-om-ahee, op’-tom-ahee The first a (middle voice) lengthened form of the second (primary) which is used for it in some tenses; and both are used as alternates of G3708; to gaze with eyes wide open, as at something remarkable; thus differing from G991, which signifies simply voluntary observation; and thus differing from G1492, which expresses simply mechanical, causal or passive vision; while G2300, and more emphatically its intensive G2334, signifies a continued but more earnest inspection; and G4648 a watching from the distance): – look, see, shew self, appear. [(Pontius Pilate had tried, to save the life, of the Messiah! )] marvelled if he were already dead: and [G4341 προσκαλέομαι proskaleomai pros-kal-eh’-om-ahee Middle voice from G4314 and G2564; to call toward oneself, i.e. summon, invite: – call (for, [un-] to). G4253 Pilate was the Centurian’s Superior. G2564 καλέω kaleō kal-eh’-o Related to the base of G2753; to “call” (correctly aloud, but used in a mixture of applications, directly or otherwise): – call (forth), (whose, whose sur-) name (was [called], bid. ] calling unto him the [G2760 Captain of one hundred soldiers.] centurion, he [G1905 ἐπερωτάω eperōtaō ep-er-o-tah’-o From G1909 and G2065; to ask for, i.e. inquire, seek: – desire, demand, ask (after, questions), question. G2065 ἐρωτάω erōtaō er-o-tah’-o Apparently from G2046 (compare G2045); to interrogate; implying to request: – desire, ask, beseech, intreat, pray. Compare G4441. [Pontius Pilate, the Governor, and Judge, of Rome, the Superior of the Centurian, and his one hundred men, investigated (searched) the matter, to check, that the Messiah was dead, before, releasing the body of the Messiah, to Joseph of Arimathaea. i.e. Study Offshoots of G2065.] asked him whether he had been any while [G599 ἀποθνήσκω apothnēskō ap-oth-nace’-ko From G575 and G2348; to die off (literally or figuratively): – lie a-dying, die, be slain (with), death, be dead. See: Offshoots of G599]

59 And when Joseph had taken the body, he wrapped it in a clean linen cloth,

2 Then she [G5143 to run or walk hastily. etc. ] runneth, and cometh to Simon Peter, and to the other disciple, whom Yehôshûa‛ Yehôshûa‛ loved, and saith unto them, They have taken away the Lord out of the sepulchre, and we know not where they have laid him.

4 So they [G5143 to run or walk hastily. etc. ] ran both together: and the other disciple did outrun Peter, and came first to the sepulchre.

7 And the [G4676 σουδάριον soudarion soo-dar’-ee-on Origin Latin ; a sudarium (sweat cloth), i.e. towel (for wiping sweat from the face, or for binding the face of a corpse): – napkin, handerchief.] napkin, that was about his head, not lying with the linen clothes, but wrapped together in a place by itself.

8 Then went in also that other disciple, which came first to the sepulchre, and he saw, and [G4100 πιστεύω pisteuō pist-yoo’-o From G4102; to have faith (in, upon, or with respect to, someone or something), credit; implying to entrust (particularly one’s spiritual well being to The Messiah): – believe (-r), to adhere to, rely on, trust, put in trust with, commit (to trust).] believed. John 20:1-8

With the use of his “Highly Advanced Radio Communication System” the devil, god of the whole world that is upon the face of this earth, is able to, enter into locked premises, that are all over this earth, and the devil, can tempt, and or hurt people, within the privacy of, “Their Locked Homes!”

Eph 2:1 And you hath he quickened, who were dead in trespasses and sins;
Eph 2:2 Wherein in time past ye walked according to the course of this world, according to the prince of the power of the air, the [G4251 a current of air, ..] spirit that now [G1754 to be active,..] worketh in the children of disobedience: 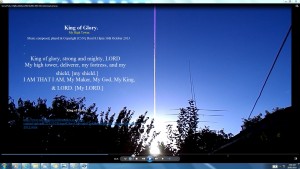 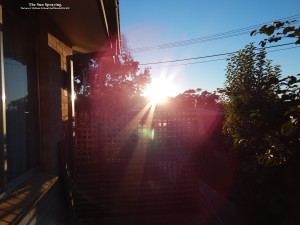 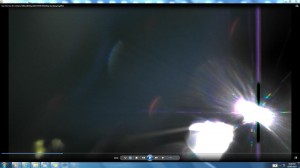 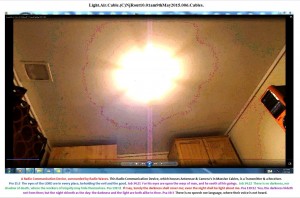 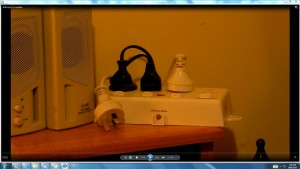 There are Antennae & Camera’s in Gigantic Cables that are above & beneath The Gigantic Sun.