The Messiah saved a woman from death by stoning.

1 The Messiah went unto the mount of Olives.

2 And early in the morning he came again into the temple, and all the people came unto him; and he sat down, and taught them.

3 And the scribes and Pharisees brought unto him a woman taken in adultery; and when they had set her in the midst,

4 They say unto him, Master, this woman was taken in [moichalis] adultery, in the very act.

5 Now Moses in the law commanded us, that such should be stoned: but what sayest thou?

6 This they said, tempting him, that they might have to accuse him. But the Messiah stooped down, and with his finger [grapho..write, describe] wrote on the ground, as though he heard them not.

7 So when they continued asking him, he lifted up himself, and said unto them, He that is without [anamartetossinless, without sin] sin among you, let him first cast a stone at her.

8 And again he stooped down, and [grapho..write, describe] wrote on the ground.

9 And they which heard it, being [elegcho..reprove, rebuke, discover, tell one’s fault, convince, convict] convicted by their own [suneidesis..knowing oneself] conscience, went out one by one, beginning at the eldest, even unto the last: and the Messiah was left alone, and the woman standing in the midst.

10 When the Messiah had lifted up himself, and saw none but the woman, he said unto her, Woman, where are those thine accusers? hath no man condemned thee?

The Messiah went to the mount of Olives.

And early in the morning he went into the temple again, and all the people came to him; and he sat down and taught them.

And the scribes and the Pharisees brought to him a woman who had been caught in the act of adultery; and when they had set her in the midst.

They said to The Messiah, Master, this woman was caught in the act of [moichalis] adultery.

Now in the law Moses commanded us, to stone her; but what do you say?

They said this to tempt him, so that they could have something to accuse him with. But The Messiah bent down, and with his finger began to [grapho..write, describe ] write on the ground, as though he didn’t hear them.

But because they kept on asking him, he stood up straight, and he said to them, He that is [anamartetos.. sinless, without sin] without sin among you, let him first cast a stone at her.

And The Messiah bent down again, and he started [grapho .. write, describe] writing upon the ground.

And those who heard what he had said, being [elegcho..reprove, rebuke, discover, tell one’s fault, convince, convict] convicted by their own [suneidesis..knowing oneself] conscience, started leaving the temple one by one, beginning from the oldest, to the last: And the Messiah was left alone, and the woman was still standing there in the midst of the temple.

And when he stood up straight, he saw that that all of the men had left, and he saw the woman standing there, then he said to the woman, Woman, where are the men who were accusing you? Hasn’t anyone condemned you?

And the woman said, No man has condemned me, Lord. And the Messiah said to the woman, Neither do I condemn you: go, and [hamartano..err, sin, trespass, offend] sin no more.

You can read about the woman who was caught in the act of adultery in the gospel of John chapter 8:1-11

Q. Who was this woman who was caught in the act of adultery?

A. We don’t know who the woman was, because the name of this woman was not recorded in the Bible.

You are “not safe” in THE PRIVACY OF YOUR OWN LOCKED HOME, from, THE DEVIL! PlZ ask Almighty God in & through the name of His only begotten Son, The Word of God, to PROTECT & DELIVER me, an old widow, every moment, of every day, for the rest of my life, upon the face of this earth, from THE DEVIL, who USES “WIRES & DEVICES” TO TUNE INTO HUMAN BODIES, & COMMUNICATE INTO HUMAN MINDS, & TOUCH, TORMENT, HURT, & OR EVEN, KILL, PEOPLE! Hebrews 2:14 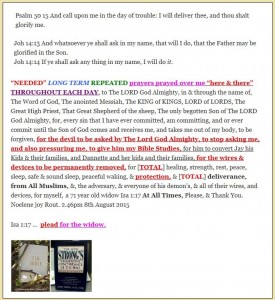