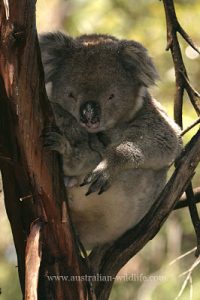 All rights reserved. Scriptures used on this page are taken from the Old King James Bible.

Hebrew words used on this page can be found in Bible Concordances.

Numbers used on this page can be found in The Strongs Concordance of the Bible.

Animals who feed their young milk from the breast are called mammals. Mammals are warm blooded animals. Regardless of how hot or cold the weather is, the temperature of a warm blooded animal’s body remains the same. Koalas are mammals.

There are two main types of marsupials, one type has six teeth at the lower front of its jaw, while the other has two. Bandicoots and quolls have six front teeth on their lower jaws, Koalas, kangaroos, possoms, and wombats have two. Koalas are marsupials.

Koalas are furry, tree dwelling, stout, pouch carrying (marsupial) Australian mammals (animals), with thick ash-grey and white hair, large tufted ears, brown eyes, and big black noses, who give birth to partially grown young, and feed them with milk from their breasts as they continue to develop hidden within pouches that are attached to their bodies.

Koalas are related to possums, wombats and kangaroos. The closest marsupial relative of the koala is the wombat who lives on the ground. Koalas and wombats have very small tails, and pouches that face towards the back. Of all of the Australian animals, Koalas are the most loved. They are found only in Australia, where they live on its eastern side and in the eastern coastal areas, of Queensland, New South Wales, and Victoria. There are a small number of koalas on the eastern side of South Australia. Koalas were once more widespread, but the koala population was reduced after Europeans who hunted them for their fur, came to settle in Australia about 200 hundred years ago.

Paws & Claws.
A koala has two clawed thumbs and three clawed toes on its front paws, and one clawless thumb (toe) and five toes, four of which are clawed on its back paws. The second and third toes of the koalas back paws are joined together. Koalas use their strong claws for gripping as they climb up trees and reach out for food. Koalas have rough and fleshy pads on the inside (palms) of their paws.

Fur.
The fur of a koala is thick, it is usually ash-grey on the body and white upon its chest. Some koalas are reddish brown. The male koalas chest is usually stained with an orange colour that is secreted from a gland upon its chest. During wet weather, protected from the rain by their thick coats of fur, koalas curl up into furry balls in the branches of Australian eucalyptus trees to keep themselves warm.

Diet, habitat, and rest.
Koalas live in the [you-car-lip-tus] eucalyptus gum trees of Australia where they eat bark and eucalyptus leaves, obtaining the water that their bodies require, from the juicy leaves. Hence the Aboriginal name ‘Koala’ which means ‘no drink’. The diet of a koala is poor, so koalas rest and relax in the forks of gum trees and digest their food for around 19 hours a day. Feeding between 4 and 6 times day and night, koalas usually become active after the sun has gone down. Koalas spend about five hours of their days eating, and climbing up and down, or jumping, from tree to tree. Koalas rarely come to the ground.

Koalas prefer a particular type of eucalyptus leaf, so, they do not eat the leaves of every eucalyptus tree. Fussy eaters, they smell each leaf before biting into it, and if the leaves are not suitable, the koalas will climb down to the gound and rapidly run to another tree. Koalas eat about 500 grams of leaves a day.

Spending time.
Koalas, who are active at night, spend about five hours a day eating, climbing up and down, sliding down, or jumping, from tree to tree, the koalas scratch and claw into the trunks of trees, and they leave footprints on the ground, and red-brown or blue green droppings which are called scats around the bases of eucalyptus trees.

Mating.
About 5 weeks after koalas have mated, a half gram 19 millimeter blind and bald, partly developed baby koala is born. The new born koala then crawls through its mother’s fur and into her pouch where it attaches itself to one of her two teats. Young koalas, hidden within their mother’s pouches drink milk from their mother’s breasts. 4711..7699..6646..Isaiah 66:11

When the young koala is six months old its eyes are open, it is covered with fur, it has teeth, and it begins to pap feed eat a special substance from its mother’s droppings.

By the time the koala is nine months old it is too big to fit inside of its mother’s pouch, so it climbs up and onto her back where, clinging fast to her body with its sharp little claws, she carries it about. Young koalas stay with their mothers until they are about 12 months old.

Endangered.
Koalas, while holding onto bark with their long, and strong claws, climb trees that are as tall as 15 storey buildings. Koala habitat is being destroyed and koala populations are being reduced as eucalyptus trees are being cut down to make room for farms and suburbs.

Deforestation!
Trees provide food, homes and shade for birds, animals, creatures, and man. Psalm 104:12..Job 40:21,22.. Daniel 4:12,21..James 1:11..Shady trees (shadows) help to keep the earth cool..Isaiah 25:5..The shaded ground beneath forests of trees is moist with water, Exodus 7:24..and the roots of the trees help to hold the soil together, Job 8:17 and the air above the forests of trees is pure and fresh and moist, producing clouds that shower us with rain. Ezekiel 17:9.. Isaiah 18:4..Joel 1:12..Genesis 2:6..The leaves of trees and also their fruits and seeds provide food for animals, birds, creatures, and man, Deuteronomy 20:19 and the leaves and fruits and seeds provide medicines for the sick. 2 Kings 20:7..Revelation 20:2..Dead trees, leaves, fruits, and seeds, fall to the ground where they decompose and feed the earth, Genesis 3:19 and trees grow again from the seeds. Genesis 1:11,12

Koala, koala, sitting in the tree.

Koala, koala, chewing on his leaves.

Koala, koala, happy as can be.

Koala, koala, come and play with me.

Predators.
Dingo’s, dogs, ferral cats and humans. There was a time when Aboriginals used to hunt koalas as a source of food, and also for their fur.

Lifespan.
Possibly 15 years in the wild.

Koala deaths.
While koalas are protected from hunters, many koalas are killed by cars as they cross dark roads within their forest habitats at the night. Koalas need people free (their own ) forests!

Arboreal: Living in trees.
Canine: Sharp pointed teeth between the incisors.
Digest: The breaking down of food in the stomache.
Gland: Part of the koalas body that produces substances which the koala uses.
Incisors: Cutting teeth.
Habitat: The territory where the koalas live.
Koala: Tree dwelling Australian native marsupial animal. Koalas are stout with thick grey and white fur, large tufted ears, small tails, brown eyes, and large black noses.
Mammal: Warm blooded, breast-feeding furry animals, who give birth to live young.
Marsupial: Animal of the class of mammals that bears incompletely developed young which it carries in its pouch. Koalas are marsupials.
Molar: Large back teeth used for grinding.
Monotreme: A mammal that lays eggs. Platypuses and Echidnas are monotremes.
Native: Species of animal originating in a place, indigenous animal.
Orphan. A young animal whose mother or father has died.
Pap feed: The producing of a special material by a mother koala for her young to eat.
Placental mammal: Mammal whose young fully develop within their mother’s bodies. Dogs, cats, and humans are placental mammals.
Scat: Animal droppings.
Teat: Part of the breast where young are suckled.
Warm-blooded: Having a body temperature that remains the same during hot or cold weather.
Wombat: Small heavily-built burrowing Australian marsupial with short legs, a small tail, and thick fur.