Had the “TRESPASSING” man who is the devil “NOT” come into my home, & “Enter Into my Body” & “PERSONALLY” introduce himself to me “BEFORE A FULL LENGTH MIRROR” as Jehovah & Jesus Christ, & then at a later time, before another mirror, and other mirrors, manifest himself to me as: Buddha, and as other person’s, and before another, mirror at a later date offer me a ministry in India, on condition I teach my Bible Studies along with Indian Teachings over there, I would not have been able to recognize “Your Offending & TRESPASSING Property, The man who is the devil!” John 8:44 1 Peter 5:8 Almighty God, in the bodies of other person’s such as, Reinhard Heydrich, Heinrich Himmler, & Adolf Eichmann! 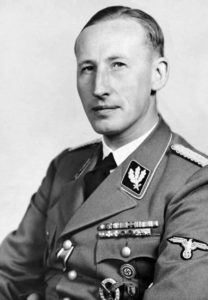 KX190K Reinhard Tristan Eugen Heydrich was a high-ranking German Nazi official during World War II, and a main architect of the Holocaust. He was an SS-Obergruppenfuhrer und General der Polizei (Senior Group Leader and General of Police) as well as chief of the Reich Main Security Office (including the Gestapo, Kripo, and SD).

Mar 16:15 And he said unto them, Go ye into all the world, and preach the gospel to every creature.
Mar 16:16 He that believeth and is baptized shall be saved; but he that believeth not shall be damned.

My name may be declared.

Exo 9:14 For I will at this time send all my plagues upon thine heart, and upon thy servants, and upon thy people; that thou mayest know that there is none like me in all the earth

Exo 9:15 For now I will stretch out my hand, that I may smite thee and thy people with pestilence; and thou shalt be cut off from the earth.

Exo 9:16 And in very deed for this cause have I raised thee up, for to shew in thee my power; and that my name may be declared throughout all the earth.

My name may / be declared / throughout all / all the earth.

My name may / be declared / throughout all / all the earth.

My name may / be declared / throughout all the earth. / the earth.

Rev 12:8 And prevailed not; neither was their place found any more in heaven.
Rev 12:9 And the great dragon was cast out, that old serpent, called the Devil, and Satan, which deceiveth the whole world: he was cast out into the earth, and his angels were cast out with him.

Num 31:1 And the LORD spake unto Moses, saying,

Num 31:2 Avenge the children of Israel of the Midianites: afterward shalt thou be gathered unto thy people.

Num 31:3 And Moses spake unto the people, saying, Arm some of yourselves unto the war, and let them go against the Midianites, and avenge the LORD of Midian.

Num 31:4 Of every tribe a thousand, throughout all the tribes of Israel, shall ye send to the war.

Num 31:5 So there were delivered out of the thousands of Israel, a thousand of every tribe, twelve thousand armed for war.

Num 31:6 And Moses sent them to the war, a thousand of every tribe, them and Phinehas the son of Eleazar the priest, to the war, with the holy instruments, and the trumpets to blow in his hand.

Num 31:7 And they warred against the Midianites, as the LORD commanded Moses; and they slew all the males.

Num 31:8 And they slew the kings of Midian, beside the rest of them that were slain; namely, Evi, and Rekem, and Zur, and Hur, and Reba, five kings of Midian: Balaam also the son of Beor they slew with the sword.

Num 31:9 And the children of Israel took all the women of Midian captives, and their little ones, and took the spoil of all their cattle, and all their flocks, and all their goods.

Num 31:10 And they burnt all their cities wherein they dwelt, and all their goodly castles, with fire.

Num 31:12 And they brought the captives, and the prey, and the spoil, unto Moses, and Eleazar the priest, and unto the congregation of the children of Israel, unto the camp at the plains of Moab, which are by Jordan near Jericho.

Num 31:13 And Moses, and Eleazar the priest, and all the princes of the congregation, went forth to meet them without the camp.

Num 31:14 And Moses was wroth with the officers of the host, with the captains over thousands, and captains over hundreds, which came from the battle.

Num 31:15 And Moses said unto them, Have ye saved all the women alive?

Num 31:16 Behold, these caused the children of Israel, through the counsel of Balaam, to commit trespass against the LORD in the matter of Peor, and there was a plague among the congregation of the LORD.

Num 31:17 Now therefore kill every male among the little ones, and kill every woman that hath known man by lying with him.

Num 31:18 But all the women children, that have not known a man by lying with him, keep alive for yourselves.

Heinrich Himmler God of the world upon the face of this earth! Luke 4:5,6

Adolf Eichmann God of the world upon the face of this earth! Luke 4:5,6

Reinhart Heidrich! God of the world upon the face of this earth! Luke 4:5,6

When the devil eats someone alive, he [captures the person in his invisible snare! 1 Peter 5:8] enters into the person’s body, and from within the persons body, he communicates directly into the mind of the person, and eventually he beats & or flogs, & or slaps the person in the face, with his (the man’s) own hands! The devil’s have no “Sexual Sensations”, they cannot be sexually gratified, and they put wires and devices into the private parts of people, and they turn them on, and the person is repeatedly [touched in his or her Private Part with the vibrating wires and devices which they themselves are unable to turn off!) raped, and the devil’s, in the case of a man, strap his private part in place. The man at the back left of this picture, might have been getting his face beaten by devil’s! Now in the past, people cannot tell other people about what is happening to them, because other people will not believe them, so the person, suffers in secret, in other words the person has to go through life being treated in this manner until he is eaten alive or dies! Now because the devil is Jesus Christ, and also Jehovah, when the person calls out in his mind to Jesus Christ, to help him, the devil, who is Jesus Christ, will not set him free. When the person within the body is dead [the mind is turned off!], the devil’s get around in the body of the man, [or the woman,], and people who see that person, do not know, that, that man, or that woman, is dead, and that that man or woman is a body, which is now inhabtied by the devil’s! In a country which is governed by the devil, the man who is the devil can have every person in that country in his snares, and he is able to move from person to person, as he rules his world upon this earth, and he is even able to communicate with the person’s within his snares, within their minds, from where ever he he may be, upon the face of this earth, in a body, or the bodies of other person’s, within his snares!

List of major perpetrators of the Holocaust https :// en. wikipedia.org/wiki/List_of_major_perpetrators_of_the_Holocaust 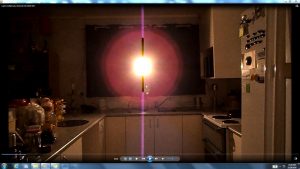 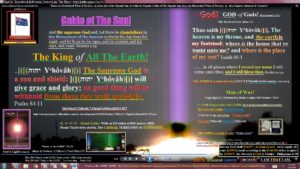 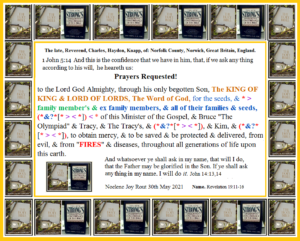 Almighty God, in and through the name of your only begotten Son, the Word of God, King of Kings, and Lord of Lords, please forgive us for our sins of the past, our sins of the present, and our sins of the future, until your Son, comes, and takes us out of our bodies, and into a state of existence, where, we cannot sin against you again. Noelene 20th June 2021

Any errors within any of my Webpages, Bibles Studies, Music, or Other Works are “Definitely Not Intentional”. Noelene Joy Rout. 20th June 2021