My first bible! I was living in Maitland, which is in the Newcastle area, Decimal Currency had been introduced in Australia in 1966, and I decided to buy a bible, so I who had by now bought myself a little car, a Volkswagen,  visited a church, I knew this church was in Maitland, I had probably driven past it on the highway, at some time or another, so I drove my car to this church and purchased my first bible, I think it was a Knox version of the bible. I took the bible back to where I was living, and I later read some of the bible, possibly commencing at Genesis 1:1.

When I was 8 or 9 years of age, my brother Keith placed a Bible into my hands and he said something like, This is God’s Word, I held it for a little while, and I recall seeing a lock on the bible. My brother then took the bible from me, and he told me he had to put it away.

That is how I learned about the Bible.

Job 9:1 Then Job answered and said,

Job 9:3 If he will contend with him, he cannot answer him one of a thousand.

Job 9:4 He is wise in heart, and mighty in strength: who hath hardened himself against him, and hath prospered?

Job 9:5 Which removeth the mountains, and they know not: which overturneth them in his anger.

Job 9:6 Which shaketh the earth out of her place, and the pillars thereof tremble.

Job 9:7 Which commandeth the sun, and it riseth not; and sealeth up the stars.

Job 9:8 Which alone spreadeth out the heavens, and treadeth upon the waves of the sea.

To study “The Elliptical Orbit of the Earth around The Sun” I had to think about how I was going to do it, so I decided to film the sun, and that was because I could not film the earth, because I was upon it. So I bought myself a camera, and I decided to use films and photographs to study the sun. From this study of the sun, I have made many Great Discoveries!

Well, I had been filming and photographing the sun, at home, and here, and there, and then one day, I went to Tuggeranong, a suburb of Canberra, and did some filming up there, and that is where I found these things, that I later called cables. 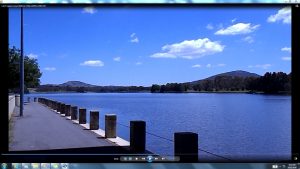 Job 9:8 Which alone spreadeth out the heavens, and treadeth upon the waves of the sea.

Having found accommodation, the next morning at [sunrise] about 6am, I commenced filming the sun rising over the Bondi Sea, and, this is what I found. 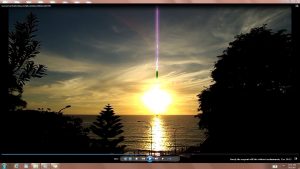 The man who is the devil had been giving me some trouble, and when I looked at the film, I saw that he had placed images, and some of “his mouth” into my movie. I recognized “his mouth” in the above picture, because, I had personally met him. The man who is the devil places pictures, [Graffitti], into people’s pictures and movies, I think he placed these images here so that I would not publish “My Discovery,” but that did not stop me, I still published my picture’s, and my movie. This  is probably some of the man who is devil’s, Graffitti, on this person’s picture! h t t p : / / www. biblestudies-by-noelenejoy.com/

The Sun Treading on The Bondi Sea. 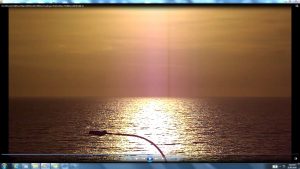 Spiralling through Space The Earth!

Now as the earth travels around the sun, the scenery in space changes, and you see the sun and it’s cables from different angles, and you might also see other objects in the sky. 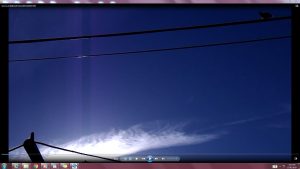 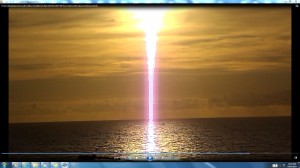 I had been watching some movies about Tornado’s on You Tube, and this particular Tornado had been raging for quite some time, and it had over turned a car, and eventually this Tornado  collided with a large Semi Trailer on a road.  Part of the Semi Trailer was over turned, and the Tornado, was gone within minutes.

Thoughts about this Tornado, and what caused it, to stop its raging.

All men should honour the Son, ..

The Son of God, teaches me, The Word of God.

Joh 6:27 Labour not for the meat which perisheth, but for that meat which endureth unto everlasting life, which the Son of man shall give unto you: for him hath God the Father sealed.

Pro 18:4 The words of a man’s mouth are as deep waters, and the wellspring of wisdom as a flowing brook.

Joh 4:4 And he must needs go through Samaria.

Joh 4:5 Then cometh he to a city of Samaria, which is called Sychar, near to the parcel of ground that Jacob gave to his son Joseph.

Joh 4:6 Now Jacob’s well was there. Yeshua therefore, being wearied with his journey, sat thus on the well: and it was about the sixth hour.

Joh 4:7 There cometh a woman of Samaria to draw water: Yeshua saith unto her, Give me to drink.

Joh 4:8 (For his disciples were gone away unto the city to buy meat.)

Joh 4:9 Then saith the woman of Samaria unto him, How is it that thou, being a Jew, askest drink of me, which am a woman of Samaria? for the Jews have no dealings with the Samaritans.

Joh 4:10 Yeshua answered and said unto her, If thou knewest the gift of God, and who it is that saith to thee, Give me to drink; thou wouldest have asked of him, and he would have given thee living water.

Joh 4:11 The woman saith unto him, Sir, thou hast nothing to draw with, and the well is deep: from whence then hast thou that living water?

Joh 4:12 Art thou greater than our father Jacob, which gave us the well, and drank thereof himself, and his children, and his cattle?

Joh 4:13 Yehsua answered and said unto her, Whosoever drinketh of this water shall thirst again: 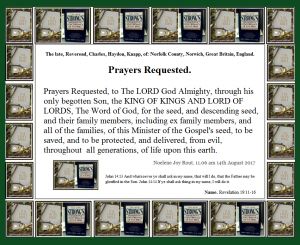 Any errors within any of my Bible Studies, or other works, or music, are “Definitely Not” intentional, Noelene Joy Rout 2.49pm 17th February 2019